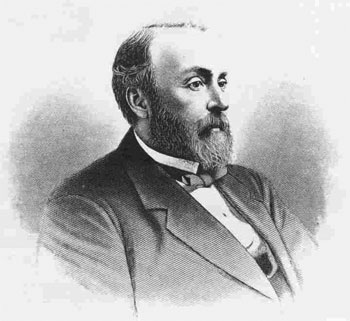 James Ludington
It's ironic that the man whom Ludington is named for never actually resided here. But his contribution to a small lumbering village was the foundation that the present day city of Ludington is built on.

James Ludington was born in 1827 in New York, and moved to Milwaukee, Wisconsin in 1843. Two years later, he and his father, Lewis founded the city of Columbus, Wisconsin. Ludington spent years as a clerk in the Old Corner Store; later becoming a proprietor. In 1854, George W. Ford borrowed money from him to begin a sawmill in the small village of Pere Marquette. Five years later, Ford defaulted on this loan, and the sawmill became the property of James Ludington. This was the beginning of his connection to the future town of Ludington.

Slowly over the next few years, the village began to grow, acquiring a post office, a boarding house, and The Big Store, which sold a variety of goods. Ludington and Col. John M. Loomis from Chicago began buying up acres of pine lands, providing employment and support to hundreds of men and their families. In 1867, Ludington platted the village of Pere Marquette--the same year he began the first newspaper, the Mason County Record. He eventually bought out Col. Loomis in 1869, and the property, which had greatly increased in value, was sold to the Pere Marquette Lumber Company (his former sawmill). Included in the sale was 25,000 acres of pine lands, unsold village lots, and the mills--all for the huge sum of $500,000.

The city of Ludington was chartered on March 22, 1873. A thousand people now inhabited the village, one of the busiest in West Michigan. James Ludington continued to put money into the village, bringing in a railroad, and providing funds for roads and bridges. He was also instrumental in securing appropriations from the government to improve the ever-important harbor.

James Ludington never married, and his body now rests in Milwaukee, Wisconsin. His contributions to this now thriving tourist town of over 8,000 lives on wherever you look. James Street and Ludington Avenue are named for him, and many streets in Ludington, Michigan bear the names of his sisters and other family members--Delia, Lavinia, Emily, Lewis, William, Robert, and Harrison.