The stark, white cross, lit at night and highly visible from the Buttersville peninsula overlooking Lake Michigan, marks the spot where Father Jacques Marquette drew his last breath in 1675. 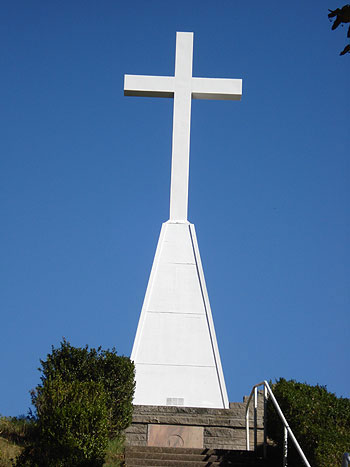 Born in 1637 in Laon, France, Marquette became a Jesuit priest. His interest in Native Americans led him to study their language in New France at the age of 29. Two years later, Father Marquette traveled as a missionary to Sault Ste. Marie, then later to LaPointe mission on Lake Superior. Here he met with members of the Illinois tribes who informed him of a "great river" (Mississippi), and invited him to teach. During this time, wars were brewing between the Hurons and Dakotas, and Marquette had to relocate to the Straits of Mackinac, where he began a new mission on St. Ignace.

Permission was granted to Marquette and Louis Joliet, a French Canadian explorer, for an expedition to find this river, which they hoped would lead to the Pacific Ocean. On May 17, 1673, with five voyageurs and two canoes, they set out from St. Ignace and followed Lake Michigan to Green Bay. Various rivers finally brought them to the Mississippi, which they became convinced flowed into the Gulf of Mexico, and not the Pacific Ocean. By the time they got to the Arkansas River, 435 miles north of the Gulf, they were told by friendly tribes that hostilities would await them further down the river, and the expedition decided to head back north.

Marquette and his fellow explorers returned to spend the winter in what would become the future city of Chicago, then traveled back to Mackinac in the spring. In 1675, Marquette decided to return to the Illini tribes, but a bout of dysentery which he picked up on his Mississippi trip, began to take its toll on his health. He wanted to make it back to St. Ignace, but it was not to be. Knowing the end was near, two French companions brought Father Marquette to the shores of Lake Michigan at what is now Ludington, Michigan, and he died on May 18, 1675. He was only 38 years old.

The shrine marks this spot, set between Pere Marquette Lake and Lake Michigan. His body was moved in 1677 to St. Ignace, and his grave is now found in the Ojibway Museum on State Street. In honor of this great missionary and explorer, many towns, rivers, and schools are named for him, including Marquette, Michigan and Pere Marquette River and Lake in Ludington, Michigan.

For more activities & attractions, check out these additional links for Things to Do in West Michigan:

Ludington Activities & Things to Do -- Play on a beautiful beach, take a tour at Historic White Pine Village, or explore the barn quilt trail, murals or sculptures in the county--Ludington offers many fun things to do for the entire family!
Have Fun in Manistee, Michigan -- Explore Manistee's historic downtown district and riverwalk, hike the Manistee National Forest, canoe on the Manistee River, and more.
Hamlin Lake -- Just 4 miles north of Ludington, Hamlin Lake is a great destination for boating, fishing and climbing dunes! The Hamlin Lake shoreline is also part of the Ludington State Park.
Silver Lake Sand Dunes -- Visiting the Silver Lake Sand Dunes makes for a terrific vacation because you can take your off-road vehicle for a spin on the scenic sand dunes overlooking Lake Michigan and Silver Lake.
Things to Do in Pentwater, Michigan -- Nothing is quite like the quaint, artsy, harbortown village of Pentwater. Don't miss the popular Charles Mears State Park beach on Pentwater's Lake Michigan shoreline.
Lots of Activities in Scottville, Michigan -- Explore the Riverside Park along the National Scenic Pere Marquette River.
Canoeing or Fishing on the Pere Marquette River -- Many boat liveries offer canoe rentals.
Also, check out West Michigan Guides and our locally produced WestMichigan.MichBiz.com directory for our largest lists of Things to Do in West Michigan.